Saga Arashiyama is a sightseeing area, which is located in the western part of Kyoto City.
It is the area where you can enjoy tasteful and colorful scenery corresponding with each season; cherry blossoms in the spring, green treetops in the summer, autumn leaves in the fall, and white snow scenes in the winter around the well-known bamboo forests and the beautiful Ooigawa River (Katsuragawa River) spanned by the Togetsukyo Bridge.

Since it had flourished as the area of villas for the nobility in the Heian Period (794-1185), a large number of poems, whose theme is based on Saga-Arashiyama, still remain. It is also a well-known area where the "Ogura Hyakunin Isshu" (Ogura Anthology of One Hundred Poems by One Hundred Poets), which is still enjoyed as a traditional card game in Japan, was compiled. 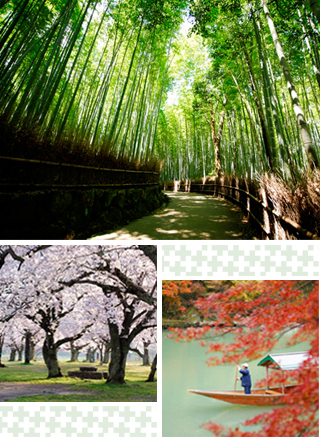 The "Togetsukyo Bridge" (literally: Moon Crossing Bridge) which is the most well-known symbol in Saga-Arashiyama. It has been said to this day that its beautiful name was given in the Kamakura Period when the Emperor Kameyama raised his eyes to the sky and the moon looked just like it was crossing over the bridge. Although the old Togetsukyo Bridge was located a little further upstream from the present location, it is said that the bridge was re-located to the present location through frequent flood damage, destruction by fire caused by the war, and so on. Additionally, the present Togetsukyo Bridge was constructed by Suminokura Ryoi, a wealthy merchant, in the Azuchi-Momoyama and early Edo Period.

Generally, the area around the Togetsukyo Bridge is called Arashiyama and the area to the north is known as Saga. You will enjoy the pleasure boat on the river, and there are many stores in a row along the street where you can purchase some souvenirs, sundries, and groceries. 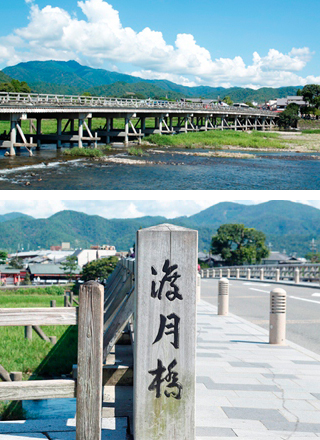 The scenery you can view in Saga-Arashiyama is a distinctive and unique scene of Kyoto, which has not been changed since ancient times. "Giou-ji Temple," "Takiguchi-dera Temple," and "Nonomiya-jinja Shrine" are not only famous as the temple and shrine enshrining the Buddha and the Deity which have been the objects of faith for the Japanese, but they are the temple and shrine which appear as the stage of classical literatures, such as the Heike Monogatari (The Tale of Heike) and the Genji Monogatari (The Tale of Genji).

Saga-Arashiyama is dotted with important temples and shrines, and noted places in the history of Kyoto and Japan, such as the "Tenryu-ji Temple" which has been registered as a UNESCO World Heritage and the "Daikaku-ji Temple" which had been the Imperial Villa for the Emperor Saga. Provided that you take advantage of the rental bicycle, which can be rented around train stations, you will be comfortably able to visit the bamboo forest path leading to the preservation district of Okusaga as well as surrounding areas of the Hirosawanoike Pond which open up to the pastoral landscape of Sagano.

Early March to early April (when cherry blossoms bloom), and mid-November to early December (when autumn leaves can be enjoyed), are the most crowded times. During the summer time, special boats are placed out on the river to be able to see the traditional cormorant fishing over the river. In the evenings, for one week in December, a night event is held by setting lanterns throughout various places in Saga-Arashiyama.

Accepting diverse international cultures and providing warm hospitality which has not been changed since ancient times.

There are various other sights to see in Saga-Arashiyama. First, it is a place where one of the few hot springs in Kyoto flows. The hot spring is called the "Arashiyama Onsen" (Arashiyama Hot Spring). It is a simple alkaline spring, and has very soft hot water, whose color is crystal and transparent. You can take the hot springs at several Ryokan (Japanese-style hotel) and the footbath at the Randen Station, and these experiences will gently heal your travel weary body.

Also, you will enjoy a tour blending together with the nature of each of the four seasons through the "Sagano Torokko Ressha" (Sagano Sightseeing Train) which covers approximately 8 km. (25 minutes) along the ravine of the Hozugawa River from Sagano leading to Tanbaji Kameoka. You will also enjoy the "Hozugawa Kudari" (Hozugawa River Boat Ride) which goes down from the upper stream (Kameoka City) of the Hozugawa River to the surrounding area of the Togetsukyo Bridge by boat.

In addition to these, there are countless sights to see such as the "Arashiyama Monkey Park," the "Shigureden: The Hall of Ogura Hyakunin Isshu" (Ogura Anthology of One Hundred Poems by One Hundred Poets), and the "Misora Hibari Za" (Misora Hibari Museum), so you will find it challenging to enjoy everything in just one day. Saga-Arashiyama is well-known as a place where you can absolutely make wonderful memories not only during a short trip, but also when visiting on numerous occasions. 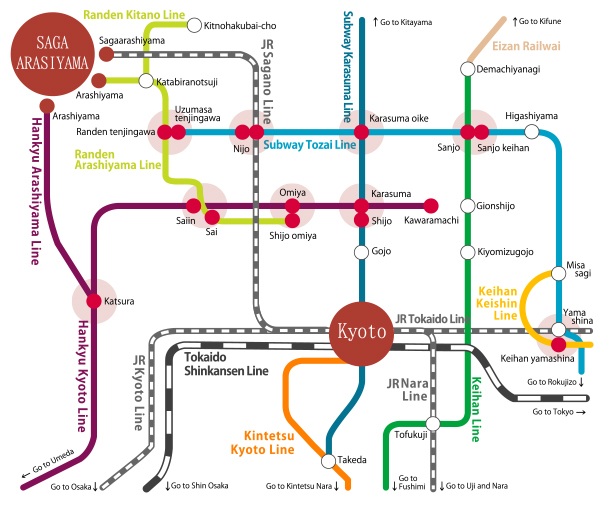